I was wondering if anybody could comment on why there seems by the data sets here to be no significant relationship between BRCA1/2 mutations and either PARP inhibition/KO or treatment with PARP inhibitors? Is the treatment time in these assays too short to elucidate the relationship? The relationship is pretty well established in the literature and through FDA approval indications for PARP inhibitors, but if you plot BRCA1/BRCA2 mutations against either RNAi or CRISPR KO of PARP, or treatment with an approved PARP inhibitor, there seems to be no particular(statistically significant) increased susceptibility in the mutant population - this is regardless of whole set analysis vs. restricting to ovarian cancers. If anybody knows why these data sets wouldn’t show such a relationship, theories apprciated.

While BRCA and PARP inhibition is outside of my expertise, one thing I do know that should be kept in mind, is that the mutations reported on the portal intended to only be somatic mutations. As a result, it’s possible that we may be under reporting the number of functionally relevant BRCA1/2 mutations that are present in our samples.

I have not verified that this is in fact happening, but I recall this concern being mentioned once around analysis involving BRCA1/2 mutations.

Thank you Phil for the response, I don’t think this is what is responsible for the lack of relationship though - even if only a subset of legitimate BRCA mutations are captured in this data set, you would still expect that subpopulation to show increased susceptibility to PARP inhibitors when compared against the background population (even if there are some hidden BRCA mutations in there). I suspect it is the treatment time in the assays, as PARP inhibition works by an indirect method in building up unrepaired DNA lesions, though it could also be that the relationship between BRCA mutation and PARPi effectiveness is not as strong as historical data would suggest. I’m not an expert on this particular pathway though, I was wondering if I was missing something obvious which might explain it.

Hi Nathan,
This is indeed interesting and I don’t know the answer and I’m not an expert but I will ask some biology collegues and come back to this thread if I find an answer. I wanted to highlight that the relationship between BRAC1 and PARP1 is strongly captured in their co-expression pattern, with a pearson correlation of 0.62. Why this correlation is lost when I choose a PARP1i (eg. olaparib) might indeed be explained by the mechanism of action of PARP1i which result in the binding (as opposed to inhibition) the PARP [protein] to the DNA, causing DNA-damage-induced cell death. 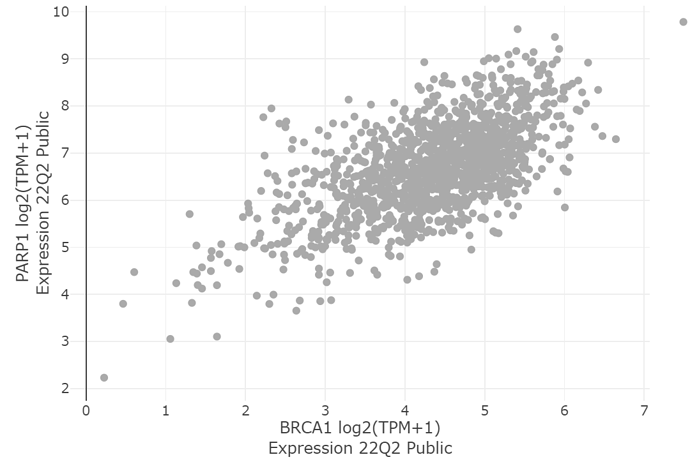 In the clinical setting PARP inhibitors are given after or in combination with DNA damaging chemotherapies, which lead to the indirect mechanism of action of PARPi in BRCA1/2 that you mention in your previous post. I don’t imagine this is replicated in any of the drug sensitivity assays or at the timescale (5 days seeding of cells). Additionally only a subset of BRCA mutations (biallelic deletions or missense mutations) have shown any efficacy. Still very much to learn about synthetic lethality!