I am looking at the achilles gene effect dependency data for PNKP.
I have found 612 cell lines where PNKP is dependent (<= -0.5), however on the search page for PNKP there are far fewer cell lines. Could you please tell me what data is being shown on the PNKP page that would cause the discrepancy.

I also wondered if you had a full list of co-dependencies for PNKP?

When you say you’re looking on the search page for PNKP, and you see fewer lines, what are you looking at specifically?

If I pull up the page for that gene ( PNKP DepMap Gene Summary ) , I see the Dependent Cell lines tile, report that 682 lines in the CRISPR dataset are dependent on this gene. 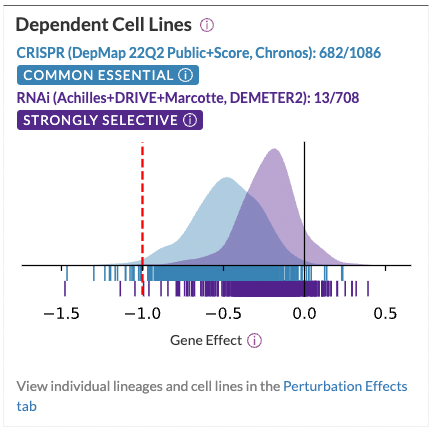 Admittedly this is not using the metric you used to call lines “dependent”, but instead testing whether the probability of dependency is > 50%, but the number isn’t so far off from what you reported.

Are you asking why there are only 13 lines that are considered Dependent in the RNAi dataset? Or something else?

I apologise for being unclear.

It was through the data explorer (not the main page - I misremembered what my supervisor had shown me).

This seems to show very few cell lines where PNKP is <= -0.5 (in the RNAi achilles set), however the achilles dataset that I downloaded had over 600 cell lines with PNKP <= -0.5

I wanted to know the difference between the dataset used for this image and the achilles dataset I downloaded (achilles 22Q2).

I hope that is clearer.

The dataset you’ve selected is the RNAi dataset from several years ago, where as the dataset you download is the CRISPR dataset from the latest data release. These are two different experimental systems for measuring gene dependencies, and as such, have different properties. For many genes, they yield the same result, but certainly not all genes due to the underlying different mechanisms used to suppress the gene in question.

If you open up the dataset selection, you should see something like: 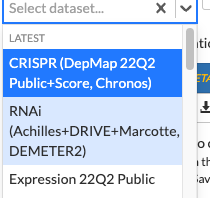 Note, the “DepMap 22Q2” in the label next to CRISPR. That corresponds to the 22Q2 data release in the download section of the portal.

If you select the latest CRISPR dataset, you’ll see scores consistent with the file you downloaded. 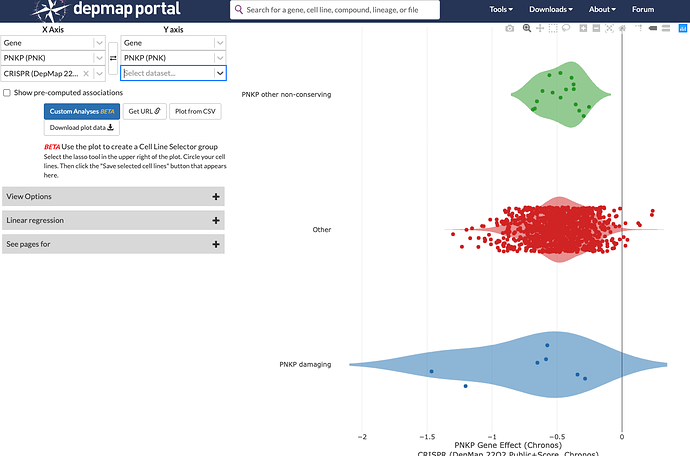