Achilles_common_essentials.csv and Achilles_gene_effect.csv are data from CRISPR screens which were performed at the Broad. The RNAi data is actually not part of any DepMap release, as we are no longer performing RNAi screens. You can find that data the DEMETER v6 release, under RNAi screens:

So if you look at the distribution of gene effect for these gene, we show the two distributions, purple for RNAi and blue for CRISPR. 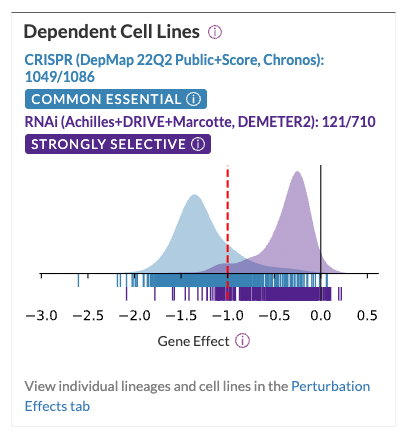 The CRISPR screens do report this as common essential, while the RNAi screens show a selective profile. The mechanisms driving knock-out vs knock-down behavior of CRISPR and RNAi are different, and so we tend to think of this not as an artifact, but a reflection of the differences in the mechanism of suppression in the two screens.