Function as a user defined group in Cell Line Selector is not available.

For comparing different groups of cell lines, I had defined cell lines in “Cell Line Selector”.
For example, after selecting lung cancer cell lines, “Lineage Sub-subtype” was defined with “EGFR_high” or “EGFR_low” manually.
But after update on 14th Dec, it does not working any more.
It would be appreciated if the developers can make this function available as before. 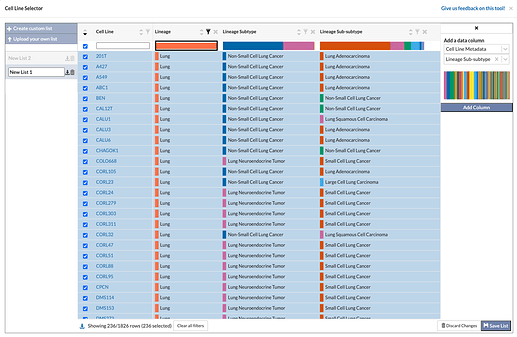 In the December 14th update, we moved to using oncotree (http://oncotree.mskcc.org/) for annotating the cancer types of all models. This cleaned up a variety of inconsistencies in our nomenclature, but it also means that we no longer have listed some of the fine grained classifications like “EGFR_high” and “EGRF_low” that we previously had.

However, those classifications were largely collected on the original CCLE collection of models, and were not consistently collected (and not collected for models that were onboarded after the original CCLE project). We’re currently exploring how to automate generation of similar annotations based on molecular characterizations that can act as a replacement for the previously manually populated annotations so that all models are annotated consistently.

You can then define your own custom cell line list in “Cell Line Selector” based on that annotation by adding them by DepMap ID in order to view them in plots or run custom analyses.